Thailand’s capital, Bangkok is known for its beautiful shrines and vibrant street life. It’s easy to feel a little overwhelmed when trying to explore the city because of its crowded population and notorious tourist schemes. So here’s my guide of all of the essential things to do and see when visiting bustling Bangkok to make it that little bit easier for you.

No trip to Bangkok would be complete without a trip to the Grand palace. located in the heart of the city, the grand palace has been home to the Thai King, the Royal court and the administrative seat of government for 150 years. Inside the palace you will find the most sacred temple in Thailand – the Temple of the Emerald Buddha. It is prophesied that the Emerald Buddha would bring prosperity and pre-eminence to each country in which it resides and so no one is allowed to touch it apart from the Thai King. The King changes the cloak around the statue three times a year during summer, winter, and the rainy season. This is an important Thai ritual as it is believed to bring good fortune to the country.

When visiting the palace beware of scams from people lurking outside it’s entrance. A common scam amoungst con artists is to say the palace is shut due to a special holiday – the aim being that they will take you elsewhere on their tuk tuk for a small fee (usual an expensive lie.) You are not allowed to show your shoulders and legs when inside the palace so make sure you cover up beforehand! If not there are shirts and skirts/trousers you can rent out for the duration of your visit. 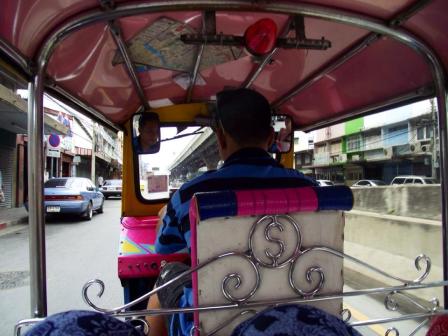 It’s almost guaranteed that you will take a ride from a tuk tuk driver at some point during your Thai travels and really it’s a must. They are a quick and cheap way to get through the lively capital and allow you to see the nooks and crannies of Bangkok. However beware of their “friendly” persistence when offering you a ride and always bargain with them as they often take advantage of tourists and lurk outside the main tourist attractions. If they offer you a tour of Bangkok the likelihood is that they’re taking you to a shop, travel agent, tailor or massage parlour. They will try and convince you that they get a coupon for petrol each time they deliver a customer – even if you don’t buy anything. You may regret pitying them as you could unintentionally spend a lot of money and waste a lot of time.

Floating markets were once a way of life throughout Bangkok but now most waterways have been filled in to create new roads. Bangkok was once known as the Venice of Asia and so experiencing them is a must. Now the markets are a split between land stalls and boats selling various foods and souvenirs. Visitors are able to navigate the market on a personal boat tour or stroll through the stalls on land. It’s worth researching the various markets available as each offer different atmospheres and merchandise. 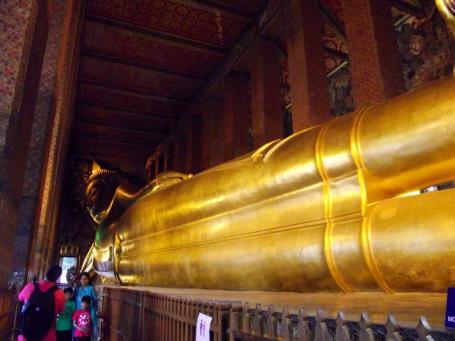 Wat Pho hosts Bangkok’s largest reclining Buddha as well as the largest collection of Buddha images in Thailand. The reclining Buddha represents the historical buddha during his last illness and was created to celebrate King Rama III’s restoration – it’s size and fame makes it a must see when in Thailand. Wat Pho is the largest temple in Bangkok and was also the birthplace of traditional Thai massage. It’s medical massage school founded in 1962 is still going strong and accepts appointments and students today.

The ancient city of Ayutthaya was founded in 1350 and is found north of Bangkok. It was destroyed by the Burmese in 1767 and is now a world heritage site due to its remains. The ruins form Ayutthaya Historical Park – an archaeological site that showcases palaces, Buddhist temples, monasteries and statues. Take a step back in time with an experience of a lifetime during a tour of Ayutthaya’s beautiful sites and scattered relics.

Dusit Zoo at Khao Din Park can be found north of the capital in its Dust district. Dusit Zoo is Bangkok’s first zoo and houses some 1,600 international and domestic animals. The zoo offers different types of monkeys, hippopotamus, tigers, lions and alligators as well as camels, penguins, wallabies, koalas and kangaroos. You can also find a Nocturnal house, reptile house, elephants house and pheasants aviary. There’s plenty of places to eat and drink as well as various entertainment such as hippopotamus feeding and fair rides. There is even a World War II underground shelter for those are aren’t interested in seeing the animals. 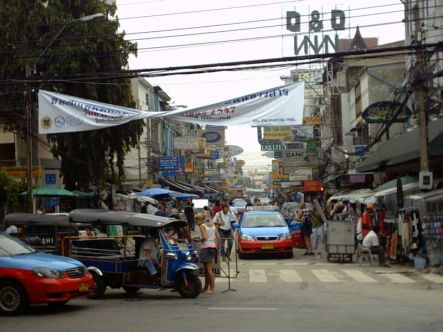 If ever there was a place that the East met the West it would be on Khao San road. Found near the centre of Bangkok Khao San is only a short street but offers long hours of entertainment. It was once a major rice market and is now a world-famous backpacker hub offering cheap accommodation from small hostels to three star hotels. As well as starting most tourist tours from Khao San it offers many shops selling paintings, clothes, pirated CDs and DVDs, fake IDs, and books. At night it turns into a big street party with bars blasting music and food venders selling cooked insects and shisha.

You may wake up with a severe stomach bug or a delightful aftertaste in your mouth. Street food can be a bit hit and miss depending on where you get it from but it’s often regarded as the best food in Bangkok. As well as being cheap you can find some rather weird and wonderful concoctions such- as cooked insects, along with noodle and rice dishes. Rice is to Asians what bread or potatoes are to Westerners so expect to be eating a lot of it. Here are the different types so you know what you’re ordering.
Woon Sen (glass noodle): a thin, wiry, transparent soya bean flour noodle
Gieow (wonton): boiled minced pork wrapped in yellow doughSen Yai (rice river noodle): a wide flat noodle made from white rice flour
Sen Mii (rice vermicelli): a small wiry looking rice flour noodle
Sen Lek: a medium flat rice flour noodle (the same kind used in pad thai)
Bah Mii: an egg and wheat flour noodle (yellow in colour)

Fans of The Hangover trilogy may be eager to visit the locations where the film was shot. One of the main movie stops is the Lebua Hotel’s Sky Bar where visitors can order a Hangovertini, which was created for the cast while they were filming the movie. Even if you have never seen the film the Sky Bar is arguably Bangkok’s best rooftop as it offers spectacular views of Bangkok making it the perfect location for photos (selfie anyone?)

2 thoughts on “Top 10 things to do in bustling Bangkok”